A wildlife Safari close to home.

My walk this week was through the Hightown Dunes and Meadows situated just north of Crosby Coastguard Station. This small nature reserve stretches from the Hall Road Coastguard Station to the mouth of the River Alt and and within it are sand dunes, a small saltmarsh, freshwater ponds and wildflower meadows.

I wandered there with my camera to see what I could find. In just over a mile I encountered over 25 different species of wild flower. Most were familiar but there were several alien species, possibly garden escapees.

Adding a splash of colour was the Everlasting Pea, the flowers showing shades of pink through to white.

Although they are very attractive they can cause problems as the plant has the ability to fix atmospheric nitrogen which increases soil fertility. this can be detrimental to other dune species.

Either side of the path leading up to Hightown there was lots of Viper’s Bugloss.

The flowers are red when in bud and then turn pink, only turning blue when fully  opened. They are especially popular with bees. The long protruding stamens make this flower resemble a snakes head hence its name.  back in the 17th century it was used as an antidote for snake poison.

Ahead of me I could see what looked like a field of gold.

It was Canadian Golden Rod. Probably a garden escapee but why were they concentrated in  this one area ?

I walked back alongside the boundary fence of the West Lancs golf club. I had been hoping to spot some butterflies but the weather was quite cool and very windy along the coast. It was more sheltered here and I might have better luck.

These two were both males. I only saw one female but she must have been shy because she flew off as I approached.

There were a few Meadow Browns.  They were less active, probably because it was so cool. 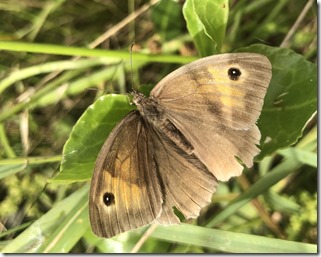 I also saw one Gatekeeper butterfly. Although in some ways it looks similar to the female Meadow Brown it can be distinguished by the fact that it has two white spots in the centre of the black eye spot on the upper wing.

I had walked just three miles but it had taken me two hours. So much to see.

My aim is to create a photo diary of my walks and my travels. I have two main hobbies, walking and photography and these complement each other. I am a senior citizen, what used to be called an old age pensioner, but I don't feel old. Since retirement I have had more time to pursue my hobbies and the opportunity to travel more. My philosophy now is - Do what you can, while you can. My other interests are fine wines and keeping fit. These may not complement each other but keep me happy.
View all posts by crosbyman66 →
This entry was posted in Butterflies, Hightown Dunes and Meadows, Natural History, Photography, Sefton Coastline, Wild Flowers. Bookmark the permalink.