On the Sunday Morning we went for a stroll along the promenade at Stressa. We paused to look at this statue of a man leading a donkey. The statue honours the Alpini. The Alpini were formed in 1872 and were a militia to defend Italy’s northern borders. Over the years the group grew with some members spending almost all of their lives in the mountains. They played an important role in both World Wars.

As we moved on we heard the sound of drums. A marching band was following us. They stopped by the Alpini statue and some of the men unfurled a large banner.

After some more music the leader made a speech whilst the men stood to attention. This was followed by the raising of the flag on the nearby flagpole.

It was a short but moving ceremony to honour the Alpini.

As we walked back we noticed that they had also laid a wreath at the Statue of the Glorious Dead. This statue commemorates the people from Stressa who lost their lives in the wars. 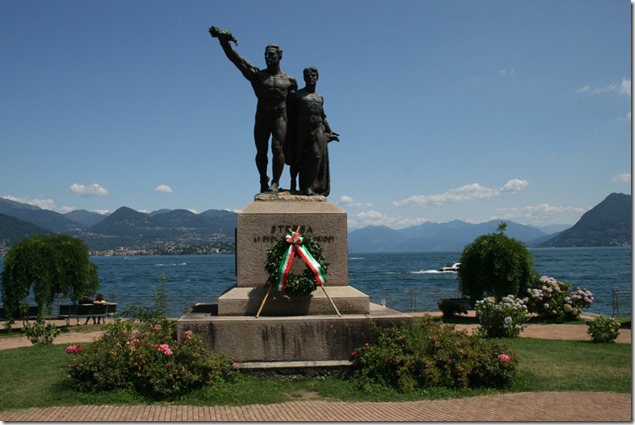 My aim is to create a photo diary of my walks and my travels. I have two main hobbies, walking and photography and these complement each other. I am a senior citizen, what used to be called an old age pensioner, but I don't feel old. Since retirement I have had more time to pursue my hobbies and the opportunity to travel more. My philosophy now is - Do what you can, while you can. My other interests are fine wines and keeping fit. These may not complement each other but keep me happy.
View all posts by crosbyman66 →
This entry was posted in Italian Lakes, Lake Maggiore, Photography, Travel. Bookmark the permalink.

1 Response to Raising the flag.