This was the view at our lunch stop on Wednesday. Leaning against a flat rock with the sun on our face and Coniston Water spread out below us, what could be better?

I was up in the Lake District with Roger doing a reccee for Crosby Rambling Club. Roger is due to lead the ‘B’ party walk on Sunday. We set off from Coniston and began the steep climb to join the Walna Scar Road. It was hard going but the reward was the views that were opening up looking towards Wetherlam and Swirl How.

After passing through a gate and the parking area we left the tarmac behind. 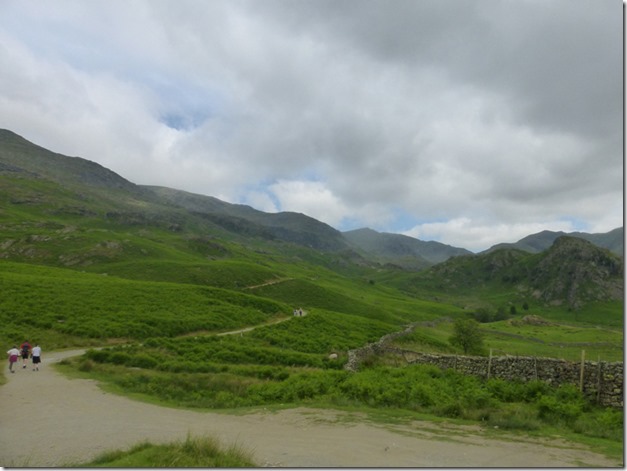 There were few people about and those that were seemed to be heading on the path leading to Goats Water on route for the Old Man of Coniston or Dow Crag. We had other plans and continued to climb up the Walna Scar road.

We walked up to Torver Bridge and Roger decided that it might be fun to continue as far as Walna Scar Pass and maybe take in Brown Pike from where we could look down into the Duddon Valley.

It seemed a good idea at the time but half an hour later when I was beginning to struggle. I was changing my mind. The top of the pass was probably only 20 minutes away but to get to the top of Brown Pike and back would probably have added on an extra hour. Had Brown Pike been one of the ‘Wainwright’s I would have gone for it but we decided to turn back and have our lunch. 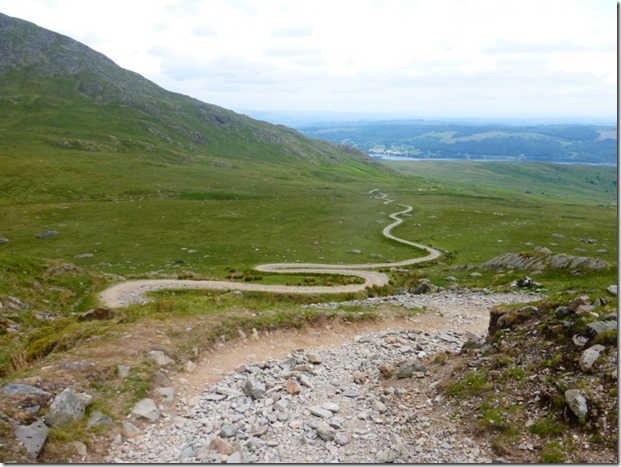 It was now back down the winding road to the intersection of paths where we could turn right and head down towards Torver. It was a pleasant path, sometimes passing through spoil heaps from the old quarry workings but never far from the tumbling Torver Beck.

We paused by the deep hole, the site of an old quarry that had a waterfall cascading into it  .The area was fenced off for safety reasons but a couple of people had found a way down and were about to go wild swimming. It was probably quite dangerous as the water temperature would have been very low.

We made our way down to Torver and then walked along a beautiful path across Torver Common to reach the lake at Torver Jetty.

Several people were sitting on the jetty waiting for the ferry which was due in 10 minutes, but catching that would be cheating. We had only got a couple of miles to go walking along the Cumbria Way long distance footpath.

It was easy walking along the shore of Coniston Water but it was very hot and I was thirsty. I had plenty of fluid with me but it was slightly warm and did not quench my thirst. We passed a camping site and by the shop we saw a sign with those magic words ‘Wall’s Ice Cream sold here’ We were soon inside and I bought an Orange Refresher Ice Lolly, or Lolly-Ice to those of you in Liverpool.

Suitably refreshed and with a new spring in our step we soon covered the final mile into Coniston.

After gratefully changing out of our boots we headed for the Crown Pub for a welcome pint. What better to order than a pint of Cumbria Way bitter. We had been walking a short section of that pathway.

We ended up walking just over 10 miles which may be a bit too much for the ‘B’ party considering the amount of ascent. We can easily tweak it to knock off a mile. All we need on Sunday is for the sun to shine and hope that the shop has not run out of ice cream.

Another great day in the Lake District.

My aim is to create a photo diary of my walks and my travels. I have two main hobbies, walking and photography and these complement each other. I am a senior citizen, what used to be called an old age pensioner, but I don't feel old. Since retirement I have had more time to pursue my hobbies and the opportunity to travel more. My philosophy now is - Do what you can, while you can. My other interests are fine wines and keeping fit. These may not complement each other but keep me happy.
View all posts by crosbyman66 →
This entry was posted in Crosby Rambling Club, Lake District, Photography, Walks. Bookmark the permalink.