Another walk on the wild side

Yesterday I went for a walk over Easington and Grindleton Fell on the edge of the Forest of Bowland in Lancashire. My walking notes said the distance was 8.5 miles and to allow 5.5 hours. That can’t be right. Even I can walk at 2 miles an hour. Or. do they know something I don’t?

We parked just off a minor road leading out of Grindleton and followed field paths to Smalden House Farm and then dropped down to cross a stream via a wooden bridge. 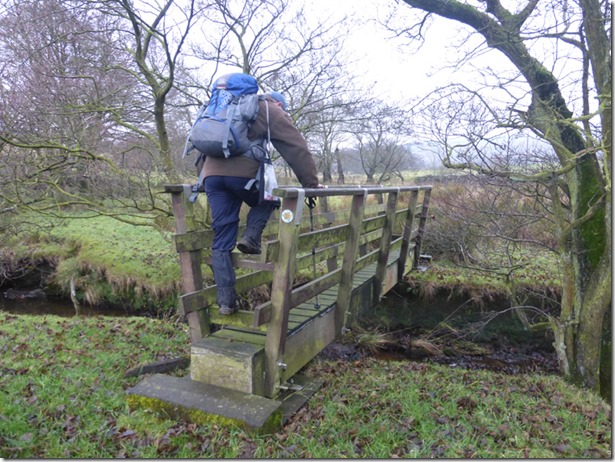 We continued past Harrap Gate and Harrap Lodge heading towards Harrap Hall. It was easy going but the way marking left a lot to be desired. We wasted a lot of time studying the map. After one hour we had only covered 1.8 miles. We crossed another bridge and took what was described as “a meandering path through marsh grass”. What it really meant was find the best route you can through the swamp. 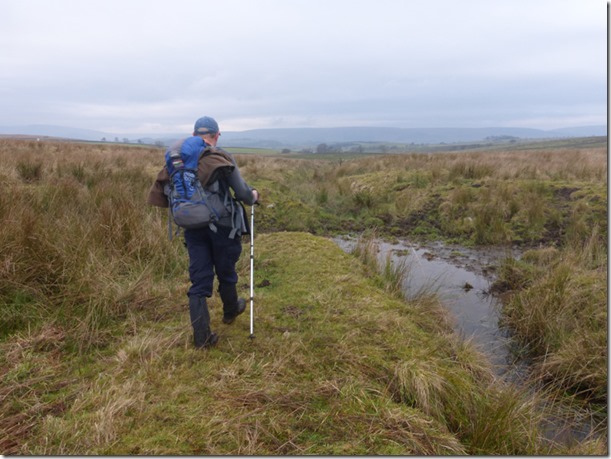 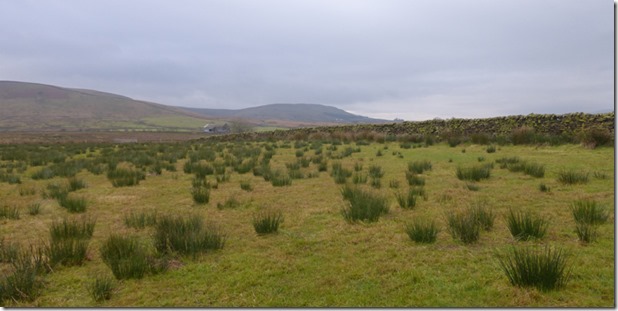 After cresting a small hill we came to another stream. The footbridge was blocked off but arrows pointed to a detour over some stepping stones. 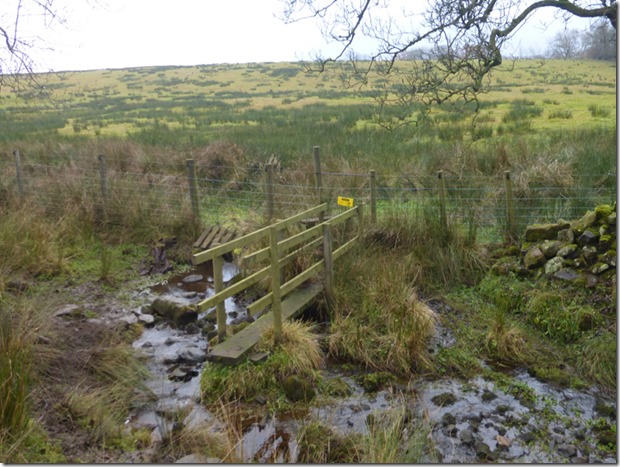 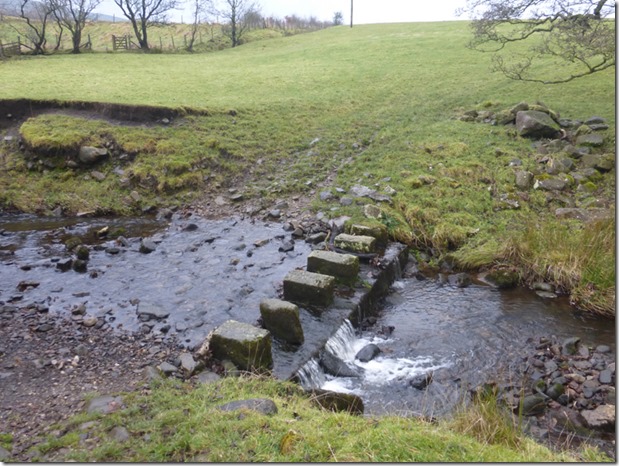 The stones were very greasy and I found it easier to just walk across the stream. We now started the steady climb up Easington Fell. It was not too steep but we were heading straight into the wind and it was hard going. We came to an unusual sign. 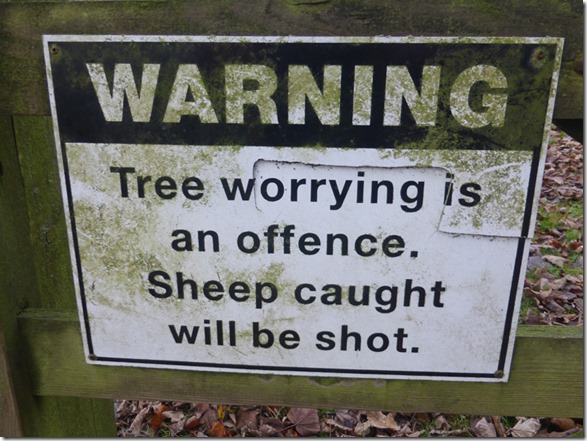 The way was clear but the moor was fairly featureless. I would not want to be here in misty conditions. Near the top of the fell we came to a pile of stones marked on the map as Old Ned. 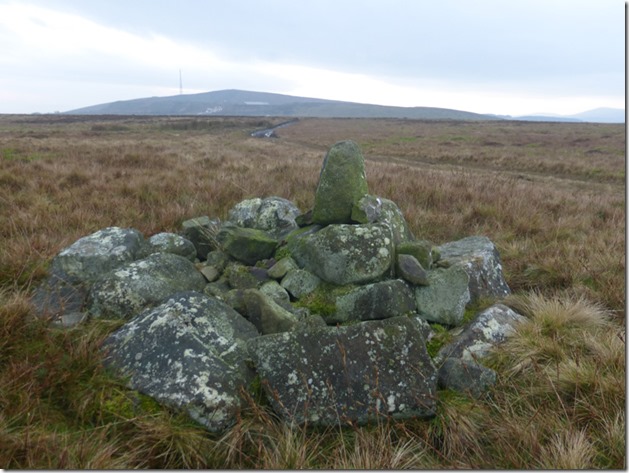 A couple of hundred yards later we doubled back to head east towards the conifer plantations on Grindleford Fell. We passed another pile of stones known as ‘The Wife’. Was it Old Ned’s Wife? 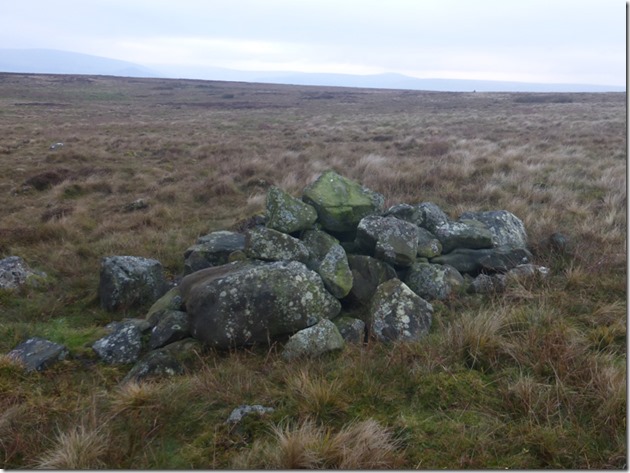 We now headed downhill alongside the conifer plantation and we were picking up time. 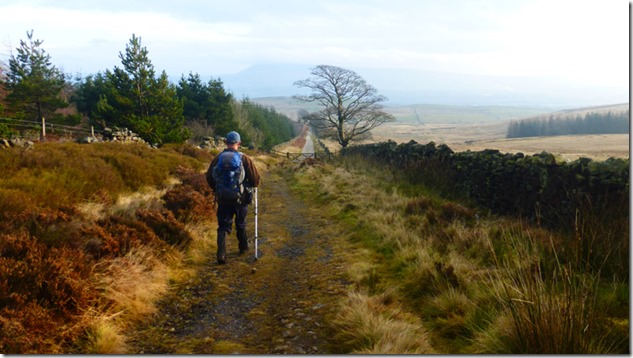 As always there is a sting in the tail. We turned off left to walk to the rear of Pine wood buildings and then followed a track known as Shivering Ginnel which led us to the trig point on Beacon Hill. 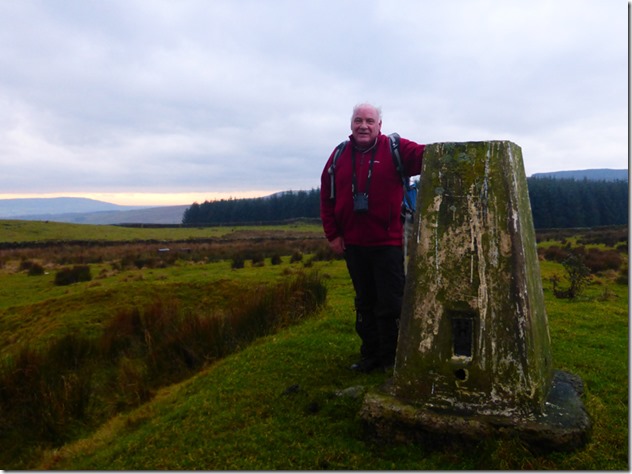 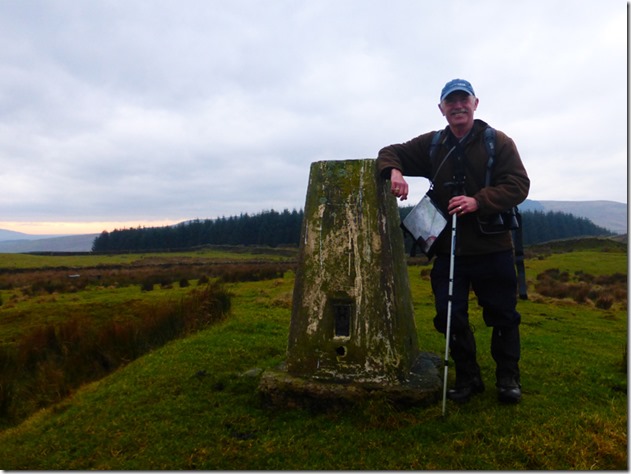 We now headed back to our car and it was getting dark when we reached it. All the ‘meandering’ had added an extra mile to the distance but we made it in just under five hours.

Almost home we called in for a pint of Rocking Rudolph in the Nags Head. Rocking Rudolph is Green Kings cask version of Hardy’s and Hanson’s Christmas Ale. At 4.2% ABV it was full bodied, fruity and had a refreshing bitter finish. We met some old friends and the beer and the company was so good we had to stay for a second pint.

My aim is to create a photo diary of my walks and my travels. I have two main hobbies, walking and photography and these complement each other. I am a senior citizen, what used to be called an old age pensioner, but I don't feel old. Since retirement I have had more time to pursue my hobbies and the opportunity to travel more. My philosophy now is - Do what you can, while you can. My other interests are fine wines and keeping fit. These may not complement each other but keep me happy.
View all posts by crosbyman66 →
This entry was posted in Adventures with Les, Lancashire, Photography, Walks. Bookmark the permalink.

3 Responses to Another walk on the wild side