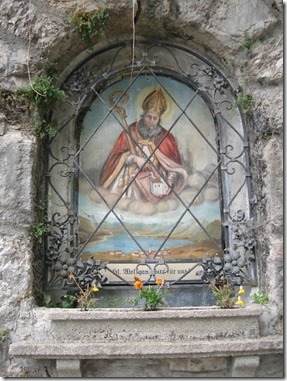 During my holiday in St Gilgen I had heard about the Pilgrim Way. It leads from Furberg, near St Gilgen, over the Falkenstein hill, through the hamlet of Reid to St Wolfgang. It involves a steep climb up the Falkenstein but it is then easy walking down to Reid and along the lakeside.

The Legend of St Wolfgang.

Bishop Wolfgang (924 – 994) was said to have come here in 976 to escape the civil war in his home town of Regensburg and lived as a recluse. He stayed on the Falkenstein and from there he threw his axe into the valley and vowed to build a church where it landed. The traces that he left on the Falkenstein were admired by the Pilgrims and some places are linked to miracle cures.

The first section of the walk as far as Furberg is an easy stroll. It is one of the few paths at Wolfgangsee that go alongside the lake and there are pleasant views back to St Gilgen and the Zwolferhorn. At one point there are some limestone cliffs and in the crevices at their base I saw some cyclamen. 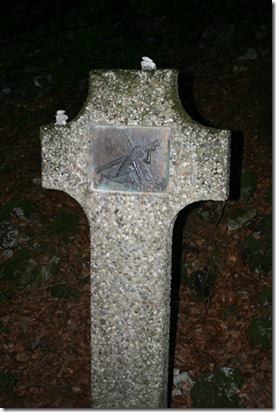 At Furberg I followed the yellow sign indicating route 28. The blue dot gives it a rating of easy but this is deceptive as there is a stiff climb to the church on the Falkenstein. The broad track climbs steadily through woodland and dotted alongside the path are ancient stone crosses each one bearing a carving of a scene of the stations of the cross. 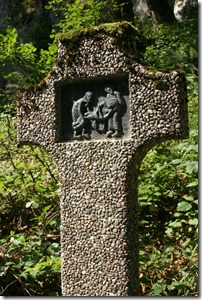 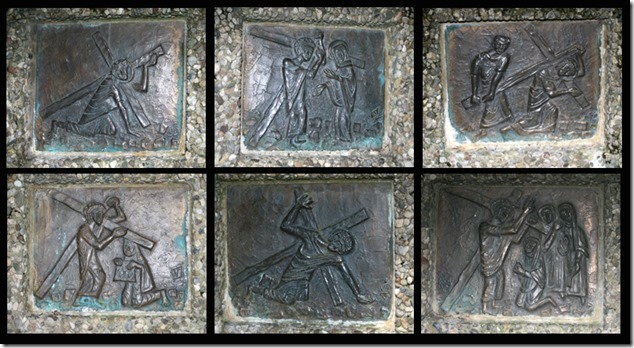 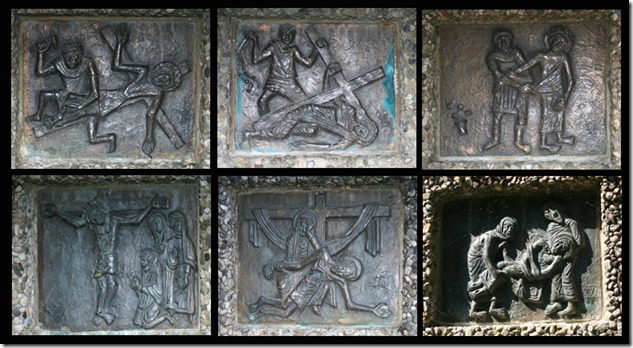 Along the way I also passed some shrines that depicted scenes from the life of St Wolfgang. 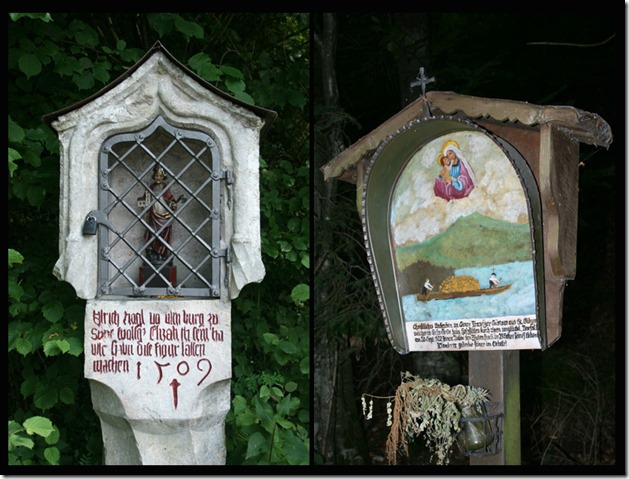 Near the top of the climb I came to a small chapel which contained several figures.

A large pile of stones can be seen opposite the chapel. The origin of these goes back to the time of the Pilgrims. To repent for their sins, the Pilgrims who climbed this “Holy mountain” had to carry a large rock with them and deposit it outside the chapel.

Today there is no need to carry a heavy rock up the mountain and placing stones in the chapel is discouraged, hence the notice.

The placing of stones in such places is a worldwide custom. The “stone Men” standing on many a mountain peak are also linked to such traditions.

Is this related to summit cairns in the UK?

At the top of the climb I reached the Falkenstein Church.

Outside was a notice board giving the history of the church. 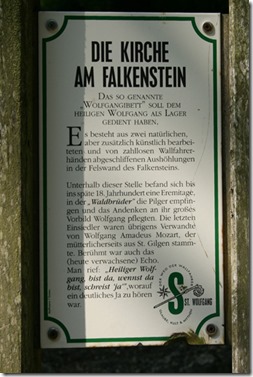 The church contains the “Wolfgang Bed” which is supposed to have been the place where St Wolfgang rested. The “bed” is comprised of two natural hollows in the rock wall that have been polished by the hands of countless Pilgrims. Below this was the hermitage where up until the 18th century the “forest brothers” received the Pilgrims and cared for the monument. Apparently the last hermits were relatives of Wolfgang Amadeus Mozart whose mother came from St Gilgen.

The church was also famous for its echo. On calling out “St Wolfgang, are you there? If you are shout “yes” a clear yes could be heard. But only in German!

The side wall is now overgrown so I could not test it out, even in English.

I was almost out of the trees and in the distance I could see Reid and Wolfgangsee.

A short distance away was another building that contained the Wondrous Water. 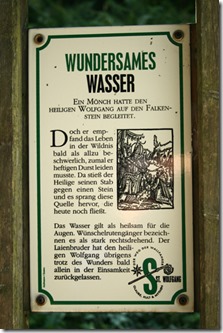 Apparently a monk accompanied St Wolfgang onto the Falkenstein. However the monk soon found life in the wilderness on the mountain too difficult, especially as he had a terrible thirst. So the saint struck his stick against a stone and a spring sprang forth which still flows today. The water is supposed to cure eye problems and water diviners point out that is has special properties.

The area round the spring was covered in green slime but I still refilled my water bottle. The water tasted OK, but it did not work. I still need my glasses for reading!

At the highest point of the route there was another information board that told the story of the Sign in the Stone. 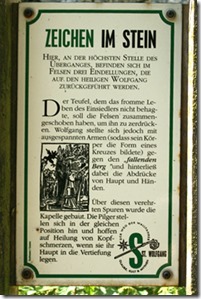 There are three impressions in the rock that can be traced back to St Wolfgang.

The devil did not like the hermit’s pious life and was supposed to have pushed the rocks together in an attempt to crush him. St Wolfgang stood with his arms outstretched in the shape of the cross and pushed against this “falling mountain” leaving behind the imprints of his head and hands.

A chapel was built around these imprints and Pilgrims used to stand in the same position and hope for the cure of headaches as they lay their head in the hollow.

Nearby, another noticeboard told the story of the St Wolfgang and the axe.

It was here that the most famous scene from the legend of St Wolfgang took place. 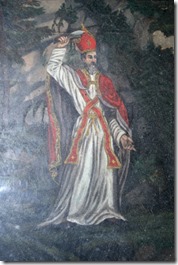 In order to flee from Satan’s constant harassment on the Falkenstein, St Wolfgang threw his axe into the valley below. He made a vow that wherever it landed he would build a church. He was true to his word and today the spot is marked by the Church of St Wolfgang in the town that now bears his name.

It was now downhill all the way but there were more places of interest on route.

The Struggles on the Pilgrimage. 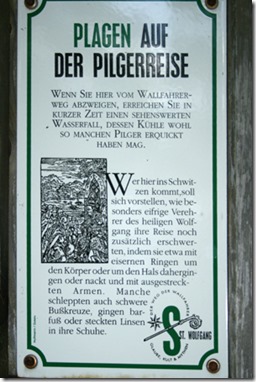 A short diversion from the main track leads to a beautiful waterfall that refreshed many a Pilgrim.

Those  of us who are perspiring when we reach this point should try to imagine how much more difficult it must have been for the Pilgrims. They made it hard for themselves by walking with iron rings round their body or neck. They walked naked with their arms outstretched. Some even dragged heavy crosses to show repentance, went barefoot or put lentils in their shoes.

Next I came to a beautiful shrine. 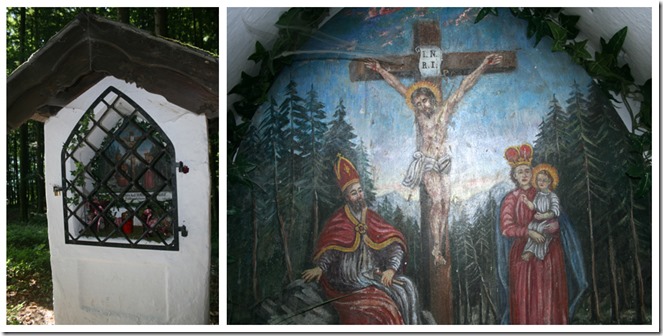 Resting on a stone.

When St Wolfgang climbed down from the Falkenstein to look for his axe, he sat down on this stone to rest.

In 1732, the abbot Bernhard Lidl wrote in his book of miracles “The stone took pity on the hermit who was emaciated through hunger and thirst and it became as soft as wax, so giving him a comfortable place to rest”

The imprints of the miracle are still there today. Pilgrims  sat there a “Lord’s Prayer length” which apparently sometimes worked miracles.

I had now emerged from the trees and was on a broad path leading down to Reid with a beautiful view of the lake ahead of me. 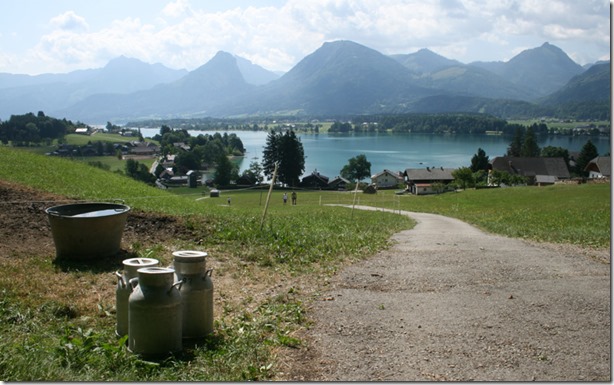 At the bottom of the Falkenstein was the Dichtl Chapel. 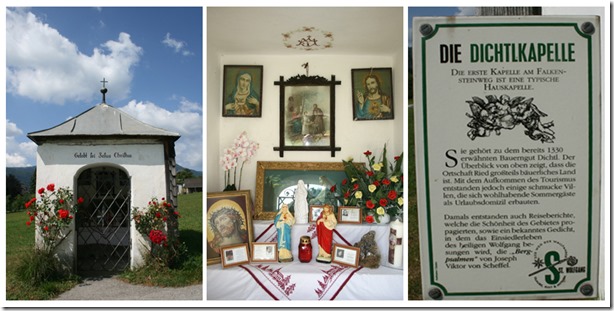 The Dichtl Chapel is the first chapel on the Falkenstein Path and is a typical private chapel.

It belongs to the Dichtl farmstead and was first documented in 1330.

It contains some beautiful pictures and statuettes. 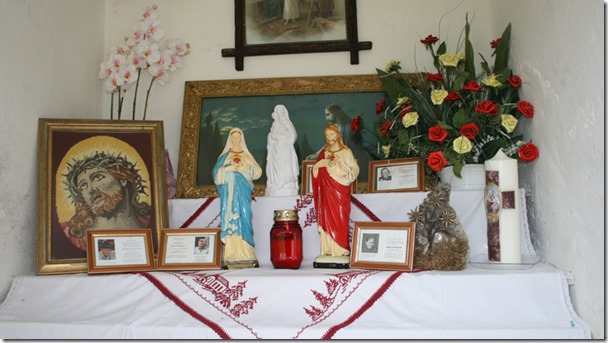 I joined the minor road running alongside the lake at Reid where I could have caught the ferry back to St Gilgen. However I wanted to complete the journey and follow the tradition of washing my hands in the Pilgrim’s fountain outside the church in St Wolfgang.

Following the road I first came to SchafbergBahn. Today as I was not about to board the train I had more time to look around and get a few images of the train in the station.

I also had a walk along the promenade. I could see the church just round the bay. I was almost there.

20 minutes later I was outside the church and standing by the Pilgrim’s Fountain.

The fountain was cast from reclaimed bell metal and depicts St Wolfgang at the top. It was completed in 1515 by Lienhard Ranacher, the bronze worker and gunsmith from Passau.

At the base of the statue are legendary creatures and four naked men showing the after effects of too much wine.

The structure above the fountain is one of the finest Renaissance buildings in Austria. 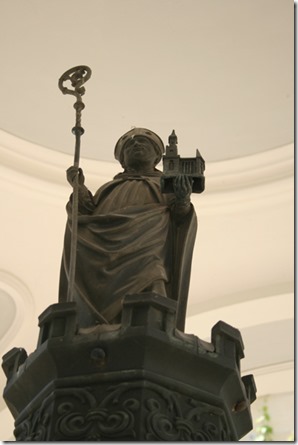 The church alongside was magnificent and contained many sculptures and paintings. I have no images as photography was not allowed inside.

I had reached the end of my journey and it was time to wash my hands in the fountain. 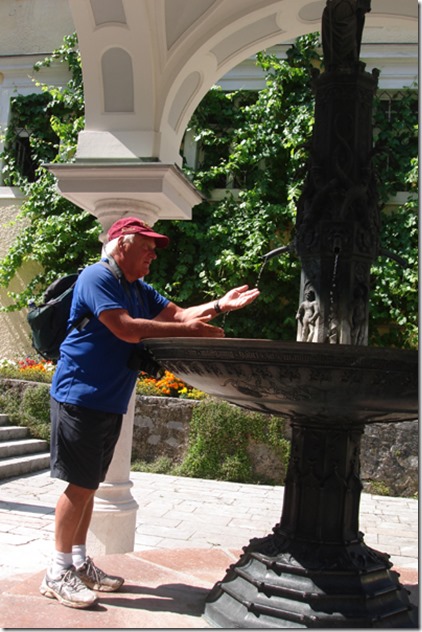 I had completed my little Pilgrimage and returned to St Gilgen on the ferry.

I relaxed on the top deck with a cold beer and reflected on what had been a superb day.

My aim is to create a photo diary of my walks and my travels. I have two main hobbies, walking and photography and these complement each other. I am a senior citizen, what used to be called an old age pensioner, but I don't feel old. Since retirement I have had more time to pursue my hobbies and the opportunity to travel more. My philosophy now is - Do what you can, while you can. My other interests are fine wines and keeping fit. These may not complement each other but keep me happy.
View all posts by crosbyman66 →
This entry was posted in Austria, Photography, Salzkammergut, Travel, Walks. Bookmark the permalink.

7 Responses to The Pilgrim Way, St Gilgen to St Wolfgang